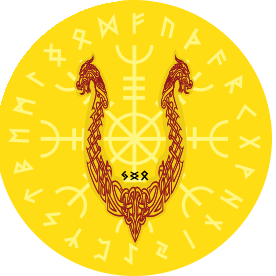 Kari Tauring
Kari will give two performances combing story and myth telling, singing, and teaching dances throughout the festival.
Kari Tauring is a Nordic folk musician, cultural educator, and spiritual leader, a staff carrier and horn player living in Minneapolis, Minnesota, USA. She began studying the Elder Futhark runes and Norse mythological poetry as an undergraduate at the University of St. Thomas in 1989.  This self-study informed her artistic life in the most profound way in 2003 when she began reconstructing the ways of the völva or staff carrying women of her heritage. Kari currently “carries the staff” of Old Norse history and tradition for her family of origin, the greater community in Minnesota, and the folk art community that sustains her work. As an artist, Kari combines her deep scholarship and immersion in the traditional folk music and dance community to create new interpretations of what it means to be Nordic.
Folk Music and Dance immersion has yielded four Nordic root recordings and countless performances with videos of past performances available on Youtube. Kari began studying traditional folk music and dance in 2006 and  received a FY2011 Folk and Traditional Arts grant for the study of rune  shapes and postures within traditional Norwegian dance. She established Nordic Roots Dance with Carol Sersland the same year. She continues to dance with the active groups in the Twin Cities and teaches a monthly dance session for beginners.  You can sample Kari’s music and performances on YouTube or on her website: https://.karitauring.com or her Facebook page.

The River Ravens (Áhrafnar)
The members of the River Ravens will set up the Viking encampment, demonstrate Viking Age crafts, do  provide warriors for mock battle.  Tim Jorgensen, one of the group founders, coordinates the Viking encampment and all the reenactors.  He is also consulting on site set-up and matters of historical accuracy.
River Ravens is a Viking Age living history group based out of Minnesota, founded by Tim Jorgensen with Kyle and Kristin Jameson in 2016. The group mission is to provide a comprehensive and historically accurate experience of what life was like in Scandinavia and areas settled by the Norse during the core period of the Viking Age (793 AD to 10066 AD). Our members are encouraged to demonstrate one or more crafts or activities documented to that period.
The River Ravens make every effort to demonstrate crafts and activities of the Viking Age using replica tools, equipment, and props based on original artifacts. This is why you’ll find their members lurking in museums with their cameras pressed up against the glass display cases. The group places a high value on research and accurate portrayal of history as part of our demonstrations.
Tim Jorgensen is also director of Viking Connection (http://www.vikingconnection.org/), a program run by the Historical and Cultural Society of Clay County, MN (http://www.hcscconline.org/). As part of that role, he will continue coordinating the annual Midwest Viking Festival as a multi-group event. Another multi-group gathering coordinated by Jorgensen is the Viking Village at the annual Norsk Høstfest (https://www.hostfest.com/) in Minot, North Dakota.
To see some of the River Ravens crafts and for more detail, log onto their website:         https://.riverravens.org or check out their Facebook page.

The Viking Age Club
The Viking Age club will provide additional Viking craft demonstrators.  In addition, Dennis Rusinko consults on historical accuracy.  The group’s website:  https://vikingage.com will provide a picture of their artisan reenactors
The Viking Age Club began in 1985, when Dennis Rusinko and Gary Anderson decided a group was needed that would portray the Vikings authentically. No horns on helmets, no bear-skins (or not many), and where demonstration of Viking crafts and skills would be as important (or more important) than weapons and fighting.  Membership in the Sons of Norway is a prerequisite to participation in the Viking Age Club.
For the past 35 years, the Viking Age Club has been giving lectures and demonstrations at schools, festivals, and celebrations throughout the United States, Canada and Norway.
The Viking Age Club & Society is a sought-after resource for schools and communities across America. Our encampment was a featured part of the Winter Olympics in Lillehammer, Norway in 1994, and we provided interpretation for the St. Paul visit of the Smithsonian's Vikings: The North Atlantic Saga exhibition.
With the explosion of Viking studies since the middle of the 20th Century. Discoveries in archaeology have enriched our knowledge of the Vikings and their lives. It is our business to keep up with this new information and it is our goal to pass it on as accurately as possible to the public.

Viking Encampment
The Viking Encampment reenactment group will be providing storytellers.  The group is an addition for 2021.  The group has both a website, http://.vikingencampment.com and a Facebook Page.
Founded in 2014 and based in Minnesota,  Viking Encampment is an education-based performance troupe  dedicated to the heritage and the history of the Viking Age. The group has performed for the past several years at the Minnesota Renaissance Festival, among other venues.  They promote education, cultural exchange and fun through active demonstrations and direct interaction with our Vikings. Educational lectures and performance opportunities from the Viking Encampment may include the following: Viking age history; development of cross-cultural trade; textiles, clothing and jewelry; Norse lifestyle and culture; weapons and warfare; games; and storytelling.